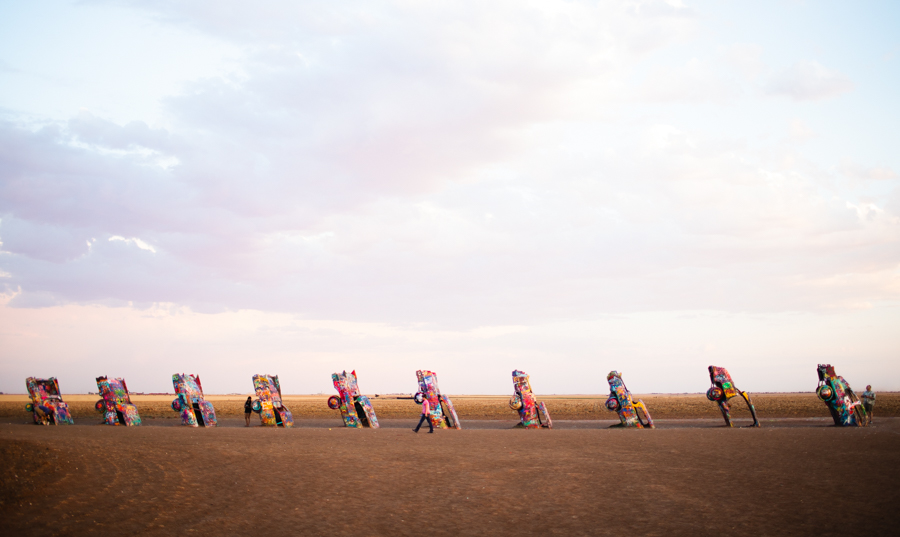 It’s been nearly a month since our last big roadtrip. Ya know, the one where we got married. I thought things would slow down after the wedding but honestly, it’s been crazier than ever. I feel like since then I’ve had one huge wedding hangover. I’m just now getting around to sorting and editing all the photos I took on that trip!

The original plan for this trip was that we’d fly into Las Vegas since it’s not too far of a drive to Flagstaff and normally has really cheap flights from Cleveland. When we first started planning our wedding/the trip flights were just under $100 round trip. We made the stupid mistake of not jumping on that deal. The longer we waited, the more the price went up until we eventually just came to the conclusion it’d be dumb to pay that much to fly to Las Vegas. We did some shopping around and ended up finding some decently priced tickets from Cleveland to Dallas. About a month before the wedding, we finally pulled the trigger. We’d fly into Dallas, Texas and then drive to Flagstaff which is the closest city to the ghost town we chose for the ceremony.

Now, I know what you’re thinking. ‘Holy smokes, Kaylah, that’s a long drive!” Yep! 14.5 hours without including time for stops! Buuut that was actually what sold us on the idea of flying there. Neither Jeff or I had ever been to Texas and it only seemed right to add an actual element of road tripping to our adventure! We love exploring new places any chance we get but one of the things that really sold us on choosing this route was that we’d finally get to visit Cadillac Ranch.

If you’re not familiar, Cadillac Ranch is one of the most popular roadside attractions out there! 10 Cadillacs are half-buried nose-first in the ground. Each completely covered in spray paint. It’s been really really reeeally high up on Jeff’s list of things to see for quite some time now and obviously, I love stupid roadside attractions so visiting on our wedding trip was an excellent plan! 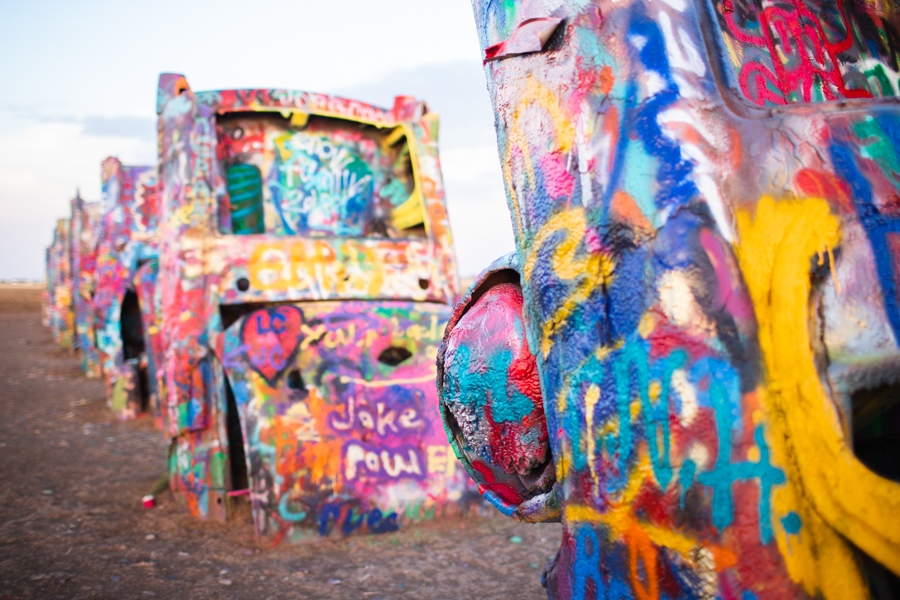 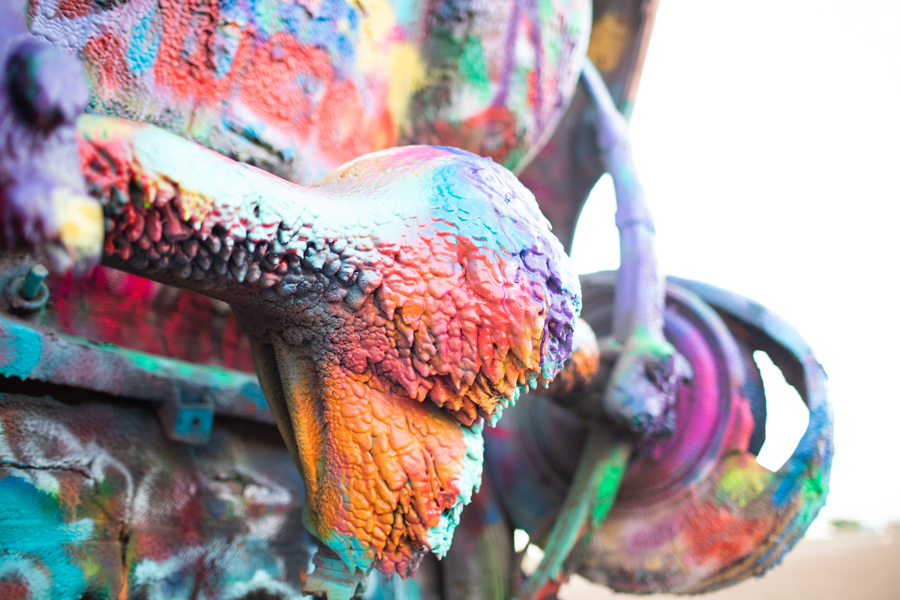 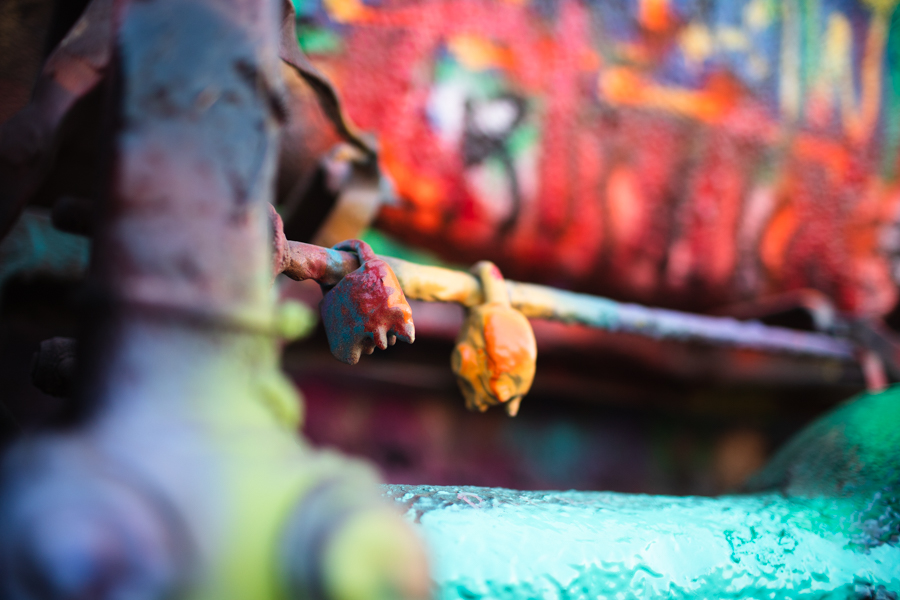 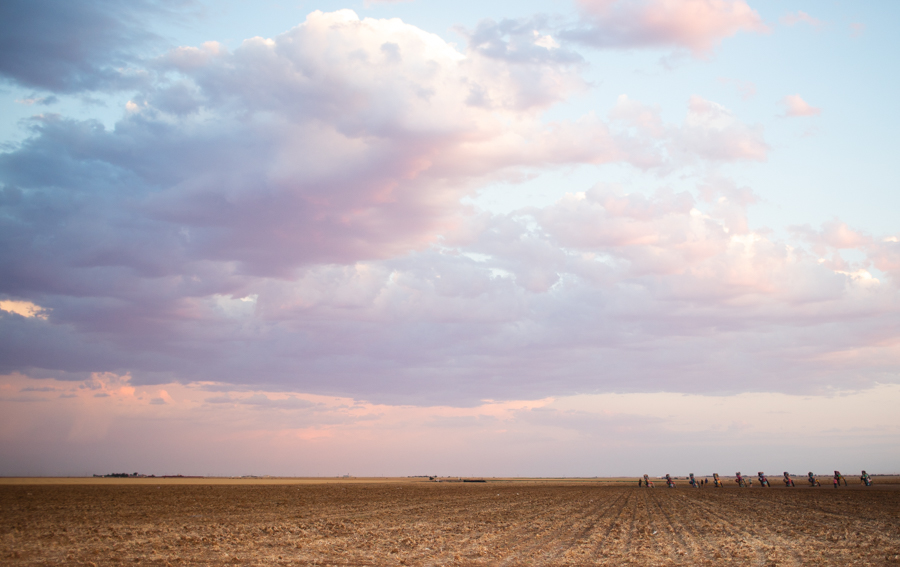 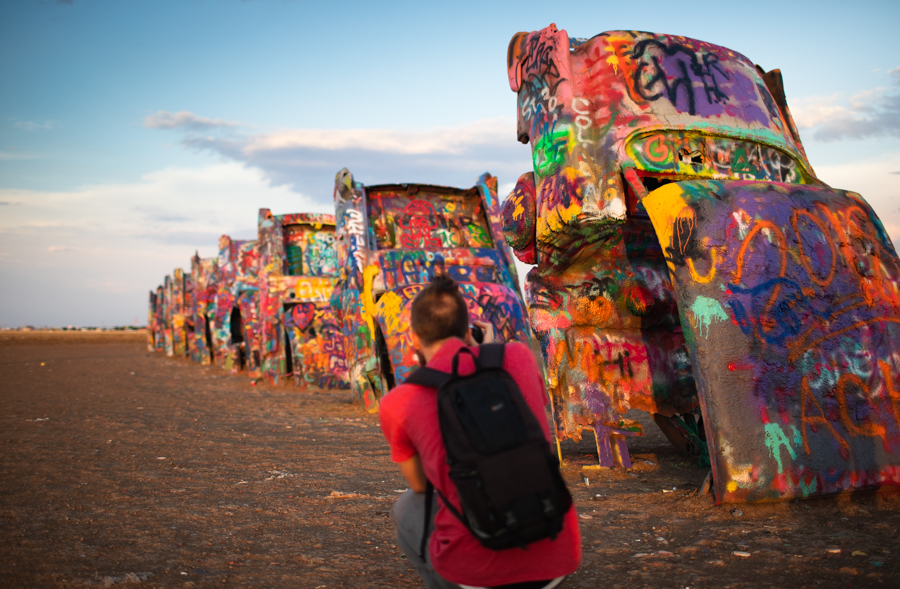 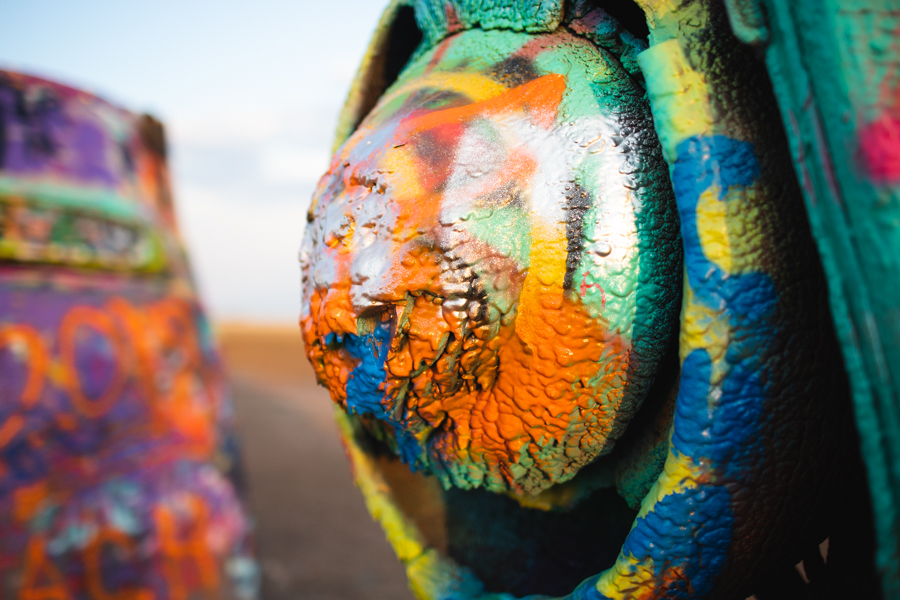 We arrived in Dallas on Tuesday afternoon, made a few small stops along the way and arrived at Cadillac Ranch just in time for magic hour. Much to my surprise, there weren’t many people there. (Something I had been stressing about!) It was perfect. The sky was beautiful and Cadillac Ranch was just as great as we had built it up to be.

Obviously going into this I knew that people painted the cars (and that I should come prepared with the goods to leave my mark) but I didn’t realize just how popular it was. The cars are covered in a couple inches of paint! Literally multiple inches of paint! There were a few spots where we saw people left their mark by actually carving their name into the thick build-up of paint. My brother, who drove from Ohio instead of flying, visited a few days before we arrived. He posted photos of each of his daughters painting their name and even wrote the name of our shared wedding album on a car. It was completely covered by the time we arrived! 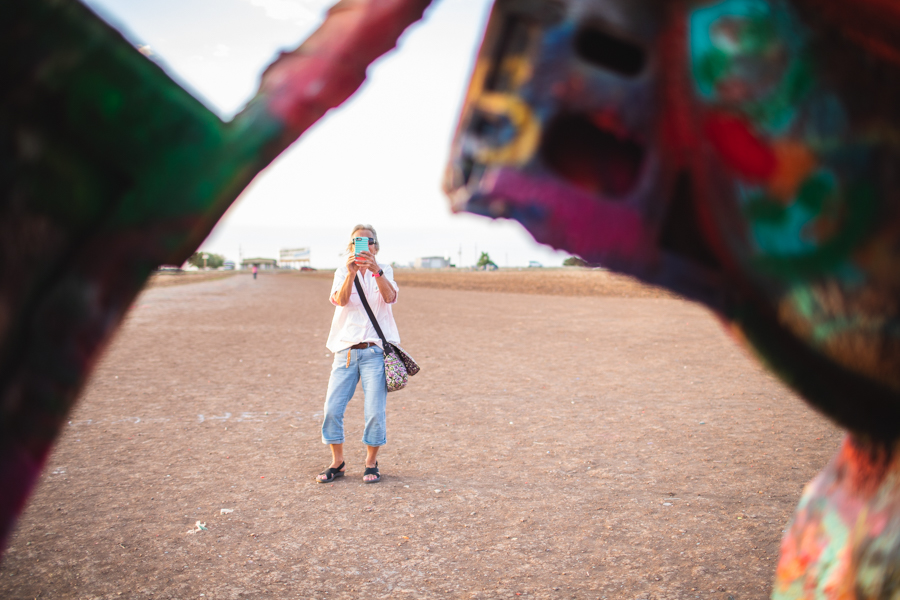 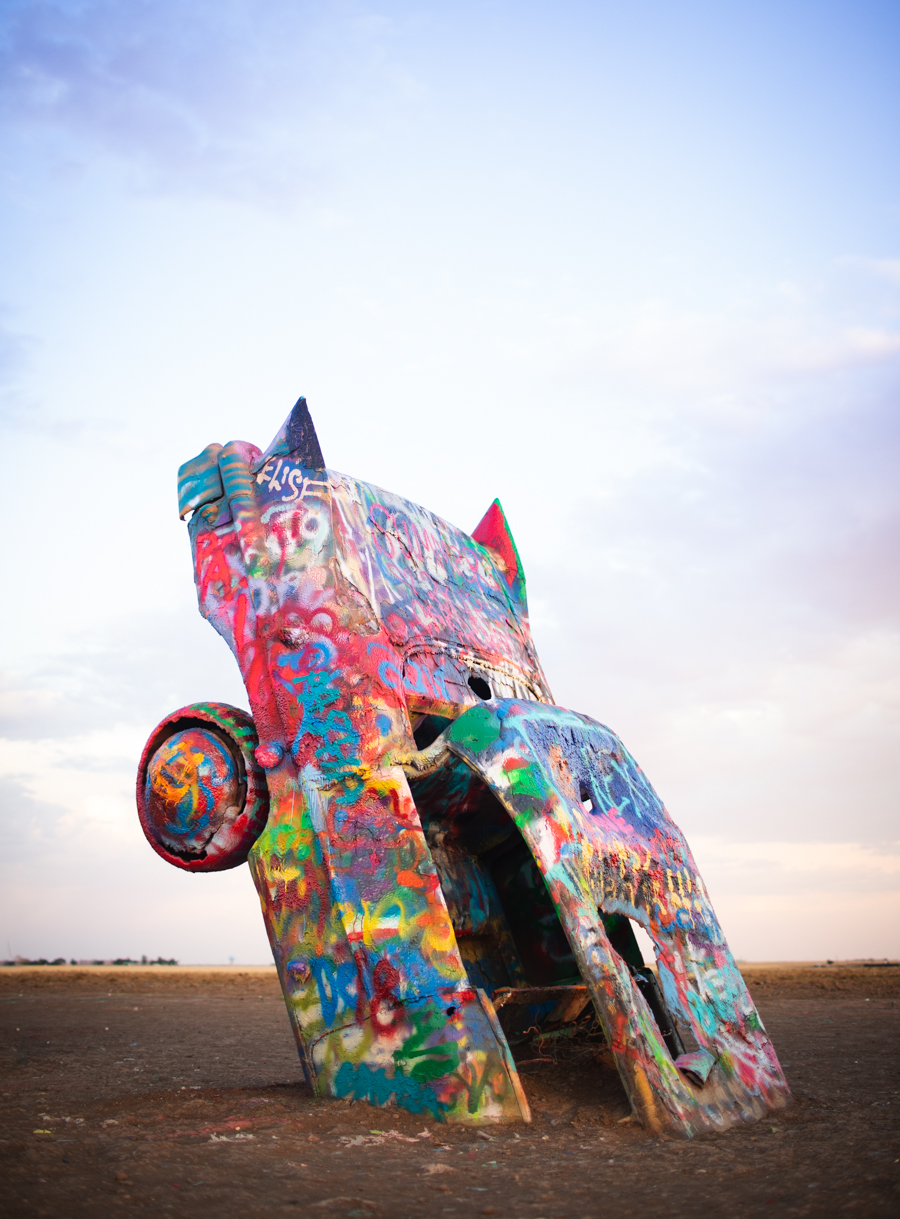 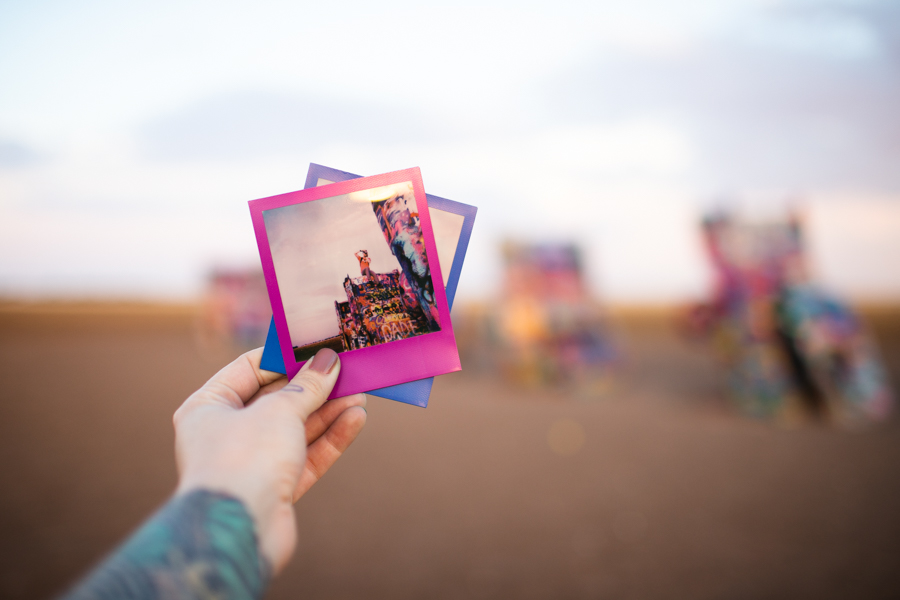 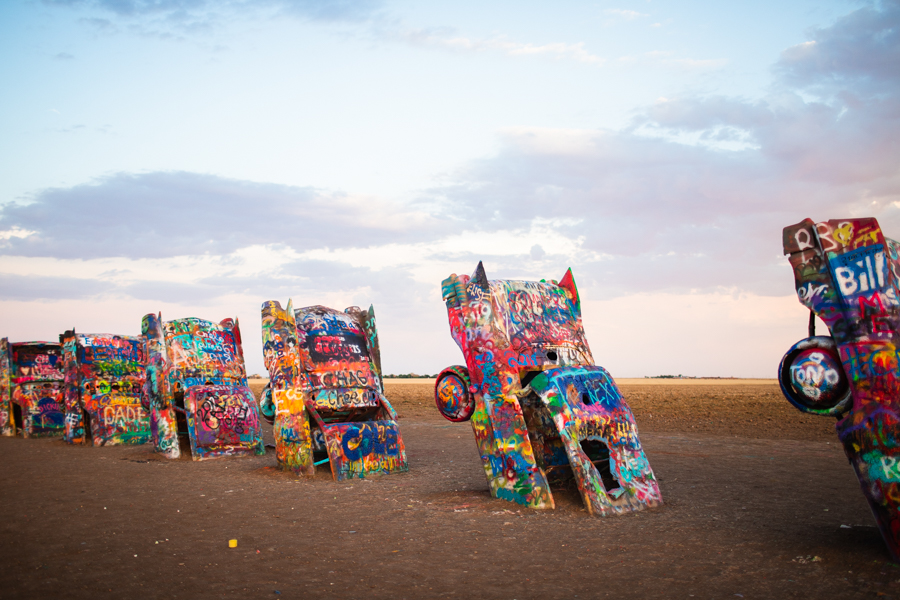 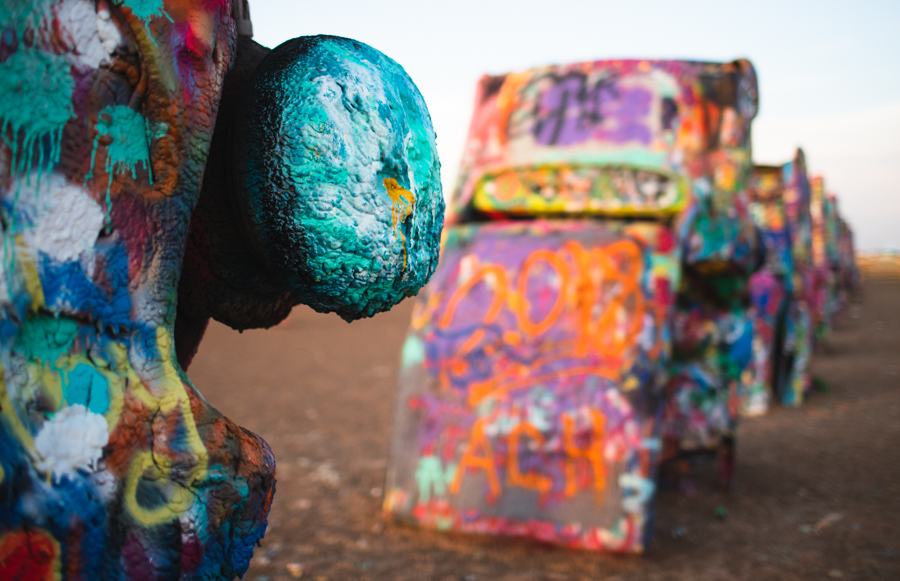 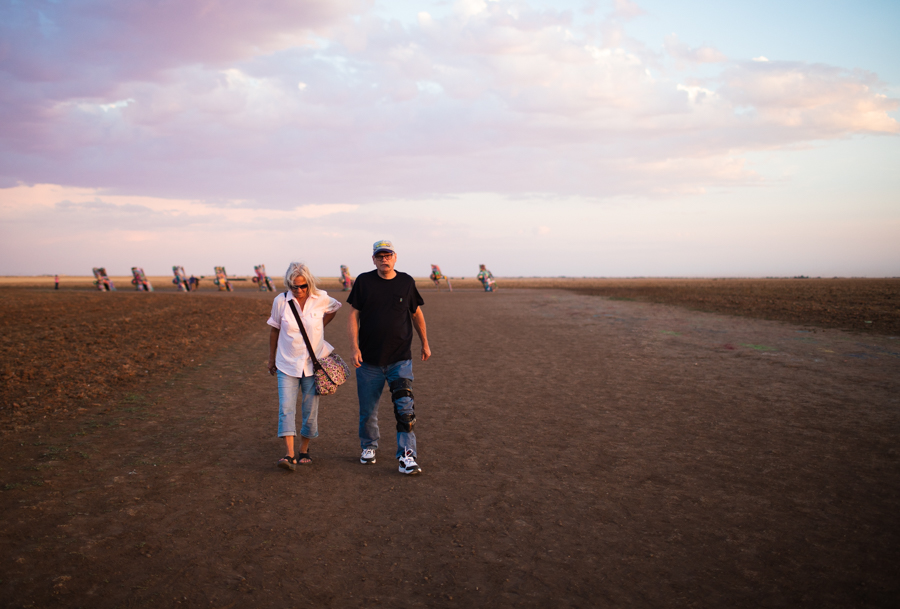 I’m excited that Jeff and I finally got to visit and even more excited that my parents were there too. I loved hearing my dad talk about when he had visited nearly 40 years earlier. It’s literally just cars buried in the ground. Nothing too special but it was the perfect start to our family roadtrip.
xoxo

If you like cars half-buried in the ground, you should also check out International Car Forest of the Last Church!

Our bedroom is looking a little different since th

Look what I macraMADE. 😛 Picked up a new hobby

Silly little exciting thing - I bought a dresser a

Thriving during winter! (My plants, not me! 😜 I

Added a new piece of mourning jewelry to my collec

Been stalling on getting a photo of this closet be

Had the wild idea last night at like 9:30pm that I

during • before • progress! • the real befor